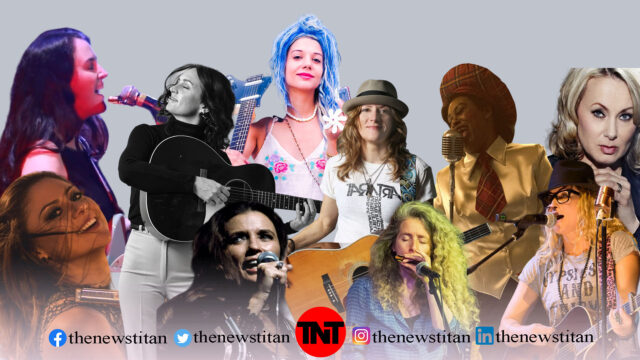 Since the 1830s, the harmonica has been a primary instrument giving us the music we love to hear. The harmonica is an easy instrument to learn for beginners compared to others. But it takes effort and high-level skills to make a way into the music industry and impress a generation by playing perfect tunes from a harmonica.

From back in history to the present, we have witnessed some of the best harmonica players of the century influence multiple generations. Fortunately, we have seen some female instrumentalists as well. And that is going to become our main topic today!

Willie Mae Thornton, aka Big Mama Thornton, was known as one of the greatest female American singers in the blues and R&B genres. From an early age, Thornton had her mind on the music. Her early life pursuing singing started at the Baptist church, where she learned music.

Making her way to music, Willie abandoned her home to become the rising “New Bessie Smith”. In 1952, Willie performed at the Apollo Theater after signing an official contract and got the opportunity to record “Hound Dog” with Peacock artist Johnny Otis.

The beginning of her career couldn’t leave much attention in the minds of audiences. From the 1950s to the 1960s, Willie saw the fading of her rising career. However, things ended up well for her In 1965 when she toured the American Folk Blues Festival in Europe. Thornton saw success in her career from that time. She never looked back in her struggling years until she was diagnosed because of heavy drinking, which took her career and life away.

To this day, she is known for her style of harmonica play in the blues genre. Only a few female harmonica players can match her skill and devotion to music.

Louise Hoffsten is a Swedish musician best known for playing harmonica in several classes, such as rock, blues, folk, and pop genres. She started her career with 1987’s Genom eld och Vatten. She is famous in her homeland and abroad as a well-established Swedish female harmonica player.

Like other female harmonica players in the list, she has achieved several awards by becoming one of the most well-recognized musicians from Sweden.

As a harmonica lover, many of you may know her for her fine work on one of the best-selling albums of all time, Breathe. Her most recent album was 2022’s Crossing the Border.

Despite building her career in music, she also wrote books and songs. Some of you may even know her for her appearance on the 2018 Swedish reality TV show Så Mycket bättre.

With all her works and harmonica playing styles of different genres, she is irreplaceably one of the best female harmonica players of this generation.

Indiara Sfair is a south American blues musician from Curitiba, Brazil. For her, music is something she admires and wants the most in her life. Coming from a musical family, Sfair got into loving playing the harmonica from a very young age.

Along with blues, rock ‘n’ roll, and other music, Sphere grew up listening to Eric Clapton and David Gilmour. In her early career, she had formed Double Blues with Ricardo Maranhão, whom she would have played for eight years straight. She has great fame in the rock and roll genre, and that makes her one of the best rock and roll harmonica players.

Later in March 2017, Sfair moved to the USA and joined the Milk’n Blues band, from where her career took a flight of success. She is still active in her professional music career as she pursues her dream of becoming one of the best female harmonica players of all time.

Vikki Elizabeth Simpson is an Australian harmonica player and an active guitarist. Starting her music career in 1990, Vicky is easily one of the few best female harmonica players on vocals, harmonica and guitar.

Vikki’s career as an Australian harmonica player started in 1992 after forming the Waifs with her sister Donna Simpson and Josh Cunningham. While working with the band, she released eight studio albums and wrote two singles. Her term with the Waifs ended in 2018, after which she returned to her home in Western Australia.

Vikki is also notable for forming two bands Vikki Thorn and the Red Tails and Thornbird. Presently, she is actively working with her band Thornbird which released its debut album at number 5 on the Australian Independent Label Chart.

Michelle Malone is an American female harmonica player, songwriter and singer. She developed a passion for music when she began performing in a church choir at age four. On top of playing the harmonica, Malone also excels at playing the saxophone, guitar and drums.

She began her career in 1986 and went straight to become one of the most skilled female instrumentalists. During her 35+ career, she won several awards and released multiple hit albums on the Grammy Award ballot.

Michelle Malone, undoubtedly one of the best female musicians of the time, truly deserves her top place on the list of Best Female Harmonica Players.

Valerie June Carter was a 5x Grammy award winner, American singer and songwriter. Being a family member of the traditional folk music group The Carter Family, she grew musical talent on the guitar, banjo, harmonica and autoharp. She is well known for her singing, songwriting, dancing, and acting career.

In her 60 years of professional career, June has won Grammy awards on

Unfortunately, in 2003, Valerie June Carter passed away at 73. Later in 2009, she became part of the Christian Music Hall of Fame.

Annie Raines is an American musician who loves her career as a harmonicist. She took an interest in playing the harmonica in her teenage period at 17. In her early career, She was best known for playing American blues as a street performer.

Like other harmonica players, Annie was deeply inspired by the albums of some legends like Muddy Waters, Little Walter Jacobs, and Sonny Boy Williamson.

She left college and went directly to pursue her professional career as an American blues harmonicist. She is one of the best blue harmonica players. We can not overlook the fact that she got a boost from Paul Rishell, who lent her musical support and helped her pursue her dreams. Right now, Annie is one of the best female harmonica players from Boston.

Heidi Newfield is a famous American music artist. She has established herself as one of the best female harmonica players in her successful career and has won several awards. She had been the lead singer, guitarist, and harmonica player for the American country music group Trick Pony before pursuing her solo career.

Heidi started her solo career on Curb Records with the single “Johnny & June,” after which she produced several albums and songs. Some of her work topped the Hot Country Songs charts and became country hits.

Furthermore, following a successful solo career, Heidi has worked with several American record producers like Tony Brown,  Blake Chancey, and others. For her impressive records and releases, Heidi was nominated for Country Music Association Awards in 2004 and the Academy of Country Music Awards in 2009 and is still active in her professional career.

Catriona Sturton is a blues singer and harmonica player from Canada. She is one of the best 20th-century Canadian female multi-instrumentalists. Her journey began in 1996 by winning a YTV Yaa! Achievement Award.

The first instrument Catriona learned was the harmonica. She was eager to become a professional blues harp player from her teenage time. Right now she is following her solo music career while sharing instructional videos to help harmonica beginners.

Rachelle Plas is an accomplished female harmonica player from France pursuing her musical career. She is known as one of the best harmonica players and follows the modern dance/soul/rock/blues/pop genres. Although she had the opportunity to pursue a professional career as a judo player, her dedication and love for music made her choose a musical career over judo.

Most of Rachelle’s plays are shared on her official YouTube channel Rachelle PLAS – Official Channel – Harmonica. She plays the harmonica, really touching the heart. She influences other female harmonica lovers to follow their dream of becoming the best female instrumentalist in history.

Although it may be too early to add her to this list, depending on her potential and talent, we cannot neglect including her in this list.

The 10 Best Guitarists of All Time

Latest Update on Sydney Hightower: Why isn’t She Feeling Secure?

What is the Religion, Family Background, Ethnicity, and Origin of Kingsley...

Top Romantic Comedies Based on Works by Shakespeare

Ashton Kutcher Proudly Stated that His Friendship with Reese Witherspoon is...

Who is Amanda Miller, the Wife of Douglas Hodge? Do they...

The 7 Best Athletes from California

Who is A Oluwatosin Mmobuosi, Dozy Mmobuosi’s wife? Net Worth and...

Who Is Lana Faith Johnson’s Husband? Family & Net Worth

Is Tyler Posey Related To Parker Posey? Family And Net Worth...

We provide you with the latest breaking news and videos straight from the entertainment industry.
Contact us: info@zamanitopc.org
© 2022 The News Titan - All Rights Reserved